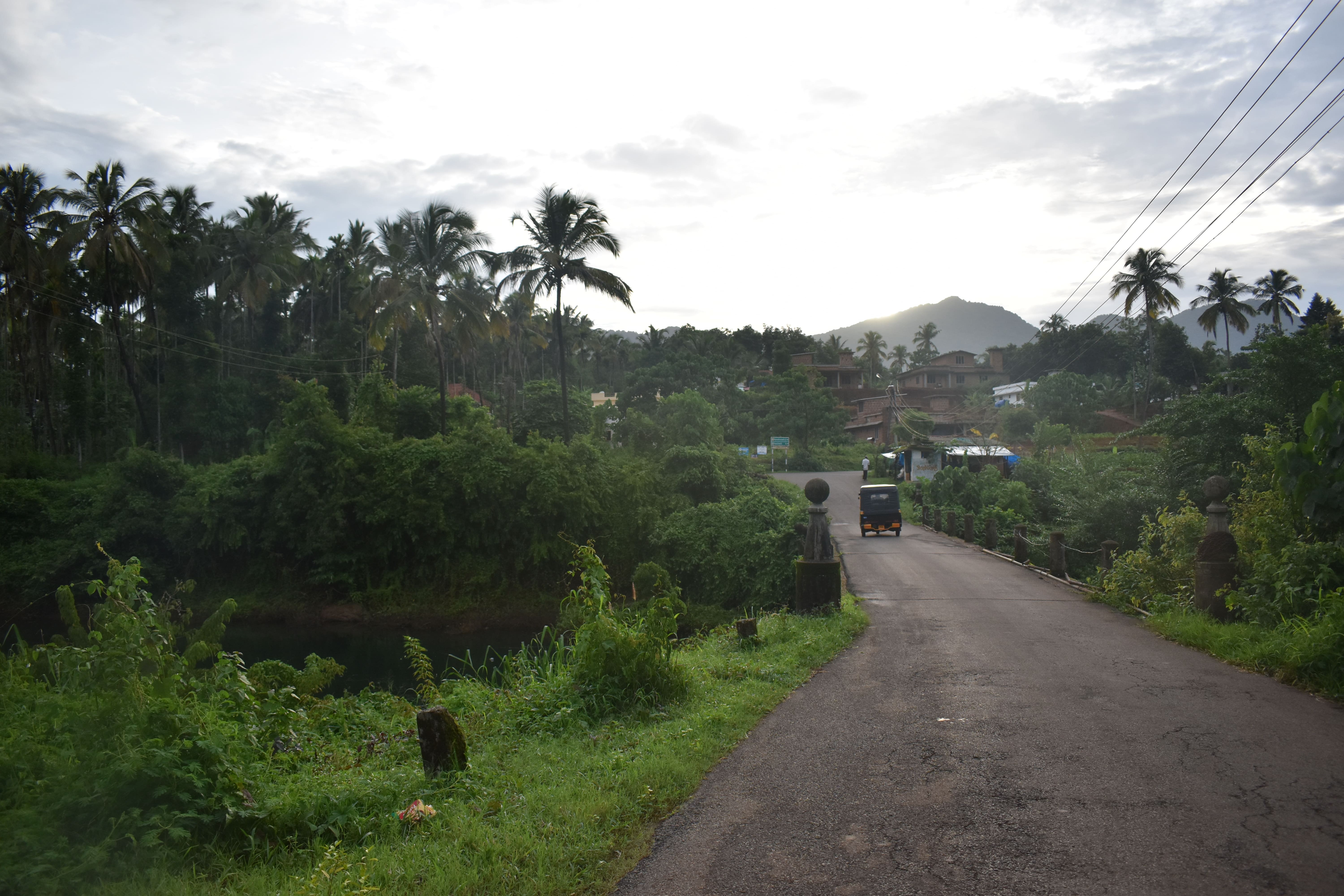 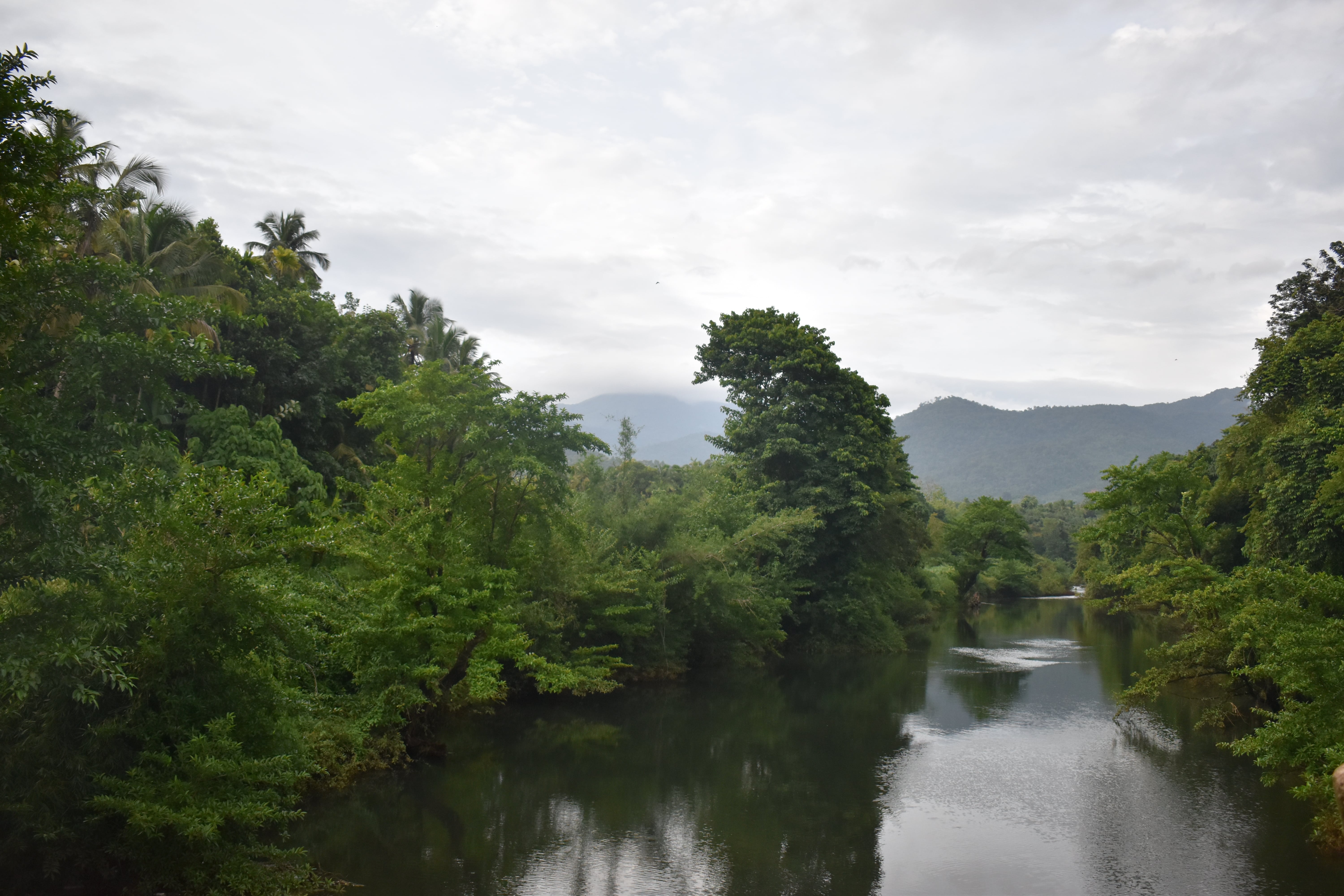 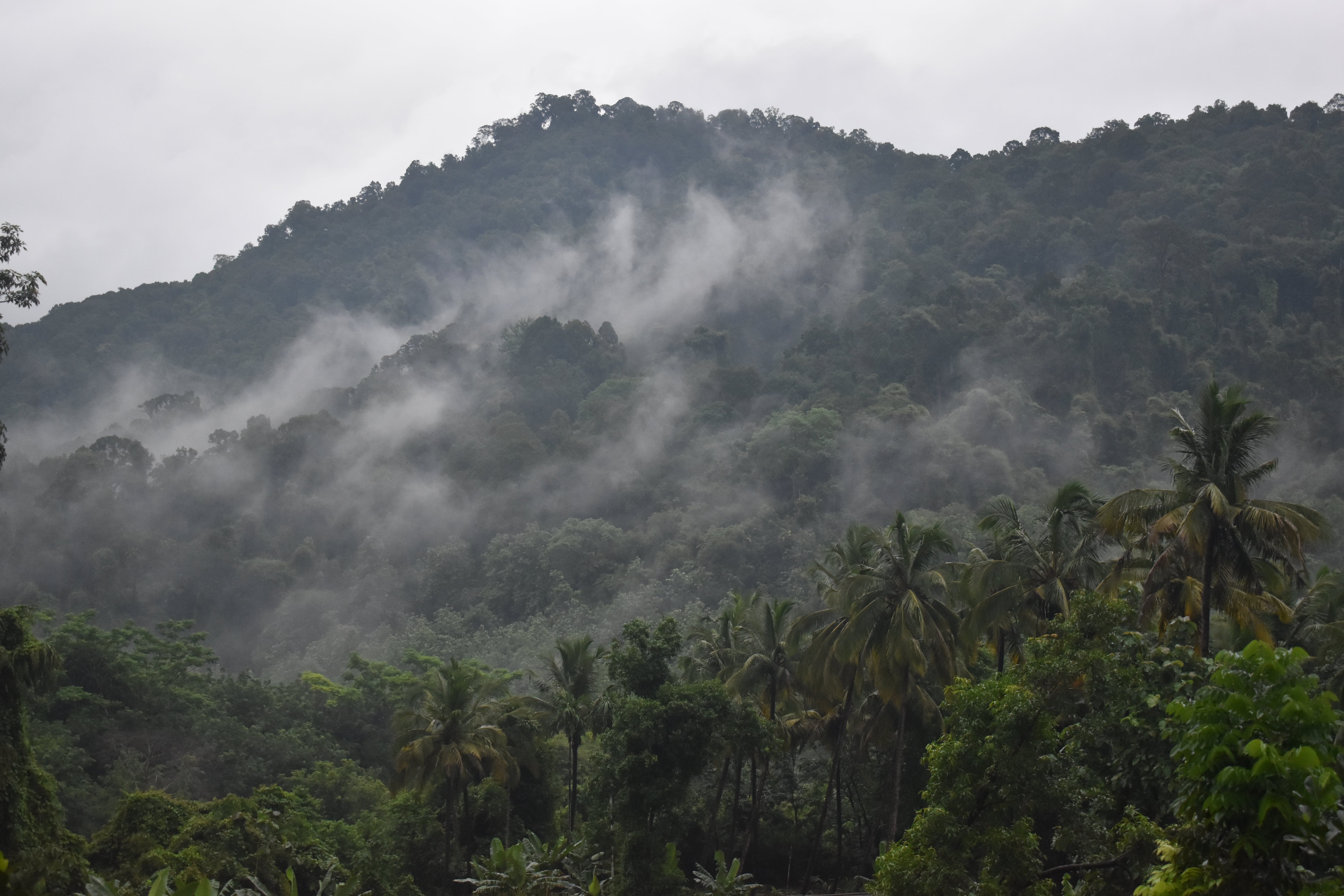 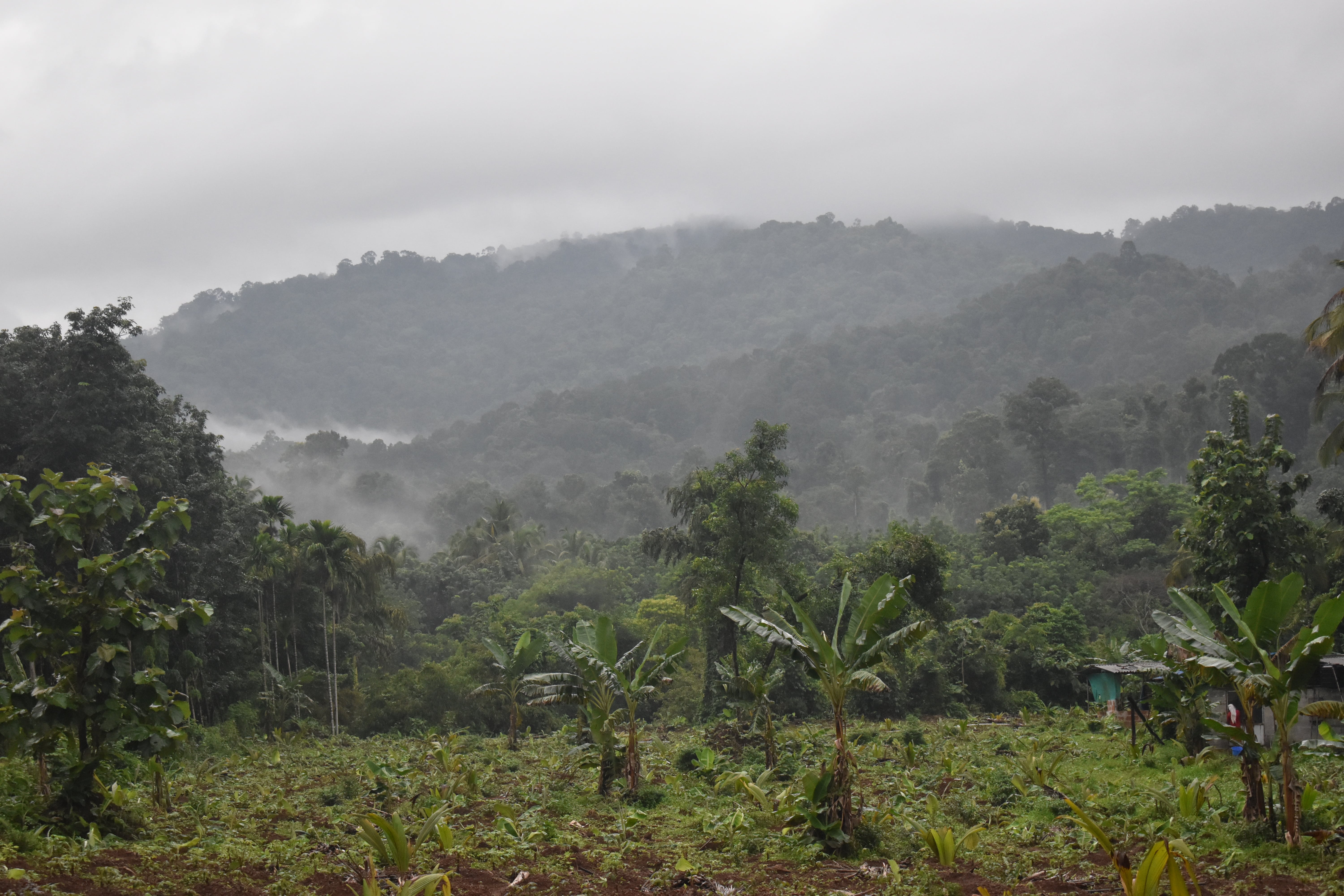 The name Manikkadave is also spelt "Manikkadavu" or "Manikadave". The myth about the name is related to the story of a "durmurthi" (evil spirit or demon) called "Manikkadachokkaali (also known as Manikkadachokkari) most feared by the aborigines, the Karimpalas. It is traditionally believed that Manikkadavu and Manippara- the two neighboring villages - got their old names Manikkada and Manipparambu respectively from ‘Manikkadachokkali’ and ‘Mani Bhagavathi or Goddess Mani. Later the settlers from Travancore modified the names to the present day form. Before the advent of settlers from Travancore, the only inhabitants of the land were Karimpalas and the place a part of a dense private forest owned by an aristocratic ‘Janmi’ (Landlord) family. The Karimpala tribe of those days found their livelihood through agriculture, fishing and hunting. They spared the huge trees in the jungle and cleared only the bush and creepers and sow paddy and other seasonal crops. Every year, after harvest, they shifted to new parts of the jungle. Through the dense forest they used to go every day in groups for hunting and fishing and anyone missed from the group was sure to be missed for ever and was supposed to be eaten by Manikkadachokkaali the ‘durmurthi’. Perhaps the poor tribal might have been killed by some wild animal, but it boosted the scare of the evil spirit always. The Karimpalas believe that there existed a temple of Lord Siva at ‘Manipparathattu’, near Manikkadavu. But, hurt by the ‘durmurthi’ and quite scared of it, the priests and other officials deserted the temple and even their homes. One day ‘Manippothi’/ Mani Bhagavathi (a goddess of the jungle called Mani) appeared at Manipparathattu to save the jungle people from the durmurthi. The goddess chased Manikkadachokkaali until at last it entered a cave at Manikkadavu near the present day Manikkadavu- Kanjirakolly road. The goddess gave the durmurthi strict orders never to cross the face of cave or hurt people any more. To immortalize the memory of her appearance, it is believed; the goddess erected at Manippara two chambers carved out of laterite one of which exists even today withstanding the challenges of the seasons all through. It is now known as ‘kallara’ (‘kallu’= stone, ‘ara’ = small room/ chamber). From the day of its appearance, there began ‘theyam’- a ritual to please the goddess. There was also a "kavu" (a sacred forest) where ‘pattutsavam’ (‘pattu’= song, utsavam= festival) was held for ten days annually to appease ‘kattu pothi (goddess of jungle- another name for Goddess Mani) whose real name, the Karimpala elders say, is ‘Chuzhali Bhagavathi’. Now there is only a single huge and tall tree in place of the former sacred forest to remind us of the ancient festivities. About five hundred meters away from the ‘kavu’, there is a cave on the right side and, during monsoon, a wondrous spring of water on the left. If we walk through the cave for about twenty five meters from its opening or entrance, we see the beginning of an underground stream.

The present Aattukaran inherited the title from his father. Every night he kindles the light calling God: ‘Iswari Mathave’ (Goddess Mother). The first Aattukaran got the title from the Nayanar family of ‘Karaykkattu Idam’ (the family of the landlords) along with a sword, red silk and gold bangles symbolizing the priestly position. In ancient days the Karimpalas had no deities other than ‘Sri Muthappan’ and ‘Goddess Mani’. On special occasions they offered chicken to the Aattukaran, especially when kalasam was conducted. In the olden days, the Karimpalas had their own way of celebrating their mangalam (marriage). The friends and relatives of the groom assemble first at his residence. Then beating thudi and singing their traditional songs, they all go to all go to the residence of the bride's uncle. There they would stay for a day. Most often the number of the team exceeds 100. Up to dawn they would all feast, beat their ‘thudi’ and sing ‘mangalam paattu’, their traditional songs meant for marriage celebration. Dowry system was quite unknown to them. Marriage among them was really an agreement between two families. If a boy and a girl fall in love with each other, his parents and ‘karanavars’ (uncles) would visit the girl’s uncle and offer him paddy, discuss the proposal and fix the marriage. Together they would drink toddy—the only liquor known to them—and their merrymaking often went on for a whole day. Cucumber was the main dish of those days. ‘Thali’- the ornament worn by Hindu women as a symbol of wedlock—was not used by them before the coming of settlers from Travancore. The marriage celebrations were conducted at the ‘karanavar’s house and expenses were met by him. The culture, and even the food habits, of Karimpalas have much changed after the large-scale migration of Christian settles from Travancore. Tapioca and many other new crops were introduced by them. The settlers bought the forest land from the janmi. They cleared forest, began to cultivate seasonal as well as permanent crops. The vast stretch of land used until their arrival at the will and pleasure of the Karimpalas for ‘ponam krishi’ thus became the land of the settlers. The particular way of farming – ‘ponam krishi’-, thus, came to an end and they were thereafter confined to a few acres of land at a hill called ‘Karimpalakkunnu’ (known also as Gandhi Nagar) in the outskirts of Manikkadavu and also at Chittari near River Udumba at Kanjirakolly. The elders among them remember their first encounters with the settlers. It was from them that they got tapioca to eat and country liquor to drink for the first time. From them, for the first time, they heard the word kristhiyani (Christian), learnt about the way of a settled life and knew about cash crops.